Have you ever bought a product and then decided that you don’t want it a couple of weeks later? And then you go to sell it online or to a secondhand store only to find that its value has hit the floor in the short period of time that you owned it? Pretty heartbreaking, right? Well, that right there is called depreciation.

Depreciation is pretty much the decline in value of a product or asset that happens over time after you buy it. And there are a few reasons for this: things get worn and torn as you use them, some things are perishable (like food and drinks), sometimes the usage rights on an asset will depreciate (such as with music royalties), natural resource usage can lead to depreciation, and products lose value as they become obsolete. For instance, the old iPhones lose value as they get replaced by newer generations.

So, those are all of the reasons for depreciation. If you think about it, pretty much every product out there depreciates (with a few exceptions here and there).

But not all products depreciate at the same speed. And, today, we’re here to talk about the ones that depreciate the fastest. Yes, the value of these products drops a ton the minute you take them out of the package or drive them off the lot.

#1: Phones, Computers, and Other Electronics

In general, any kind of consumer electronics are going to depreciate more than anything else that’s sitting around your house. In fact, consumer electronics often lose from 30% to 70% of their value in their first year after you buy them. That’s a ton of value lost in a very short amount of time.

In 2021, Self.inc did a study of what household products lose value the quickest. And, if you look at the list, pretty much everything is consumer electronics. 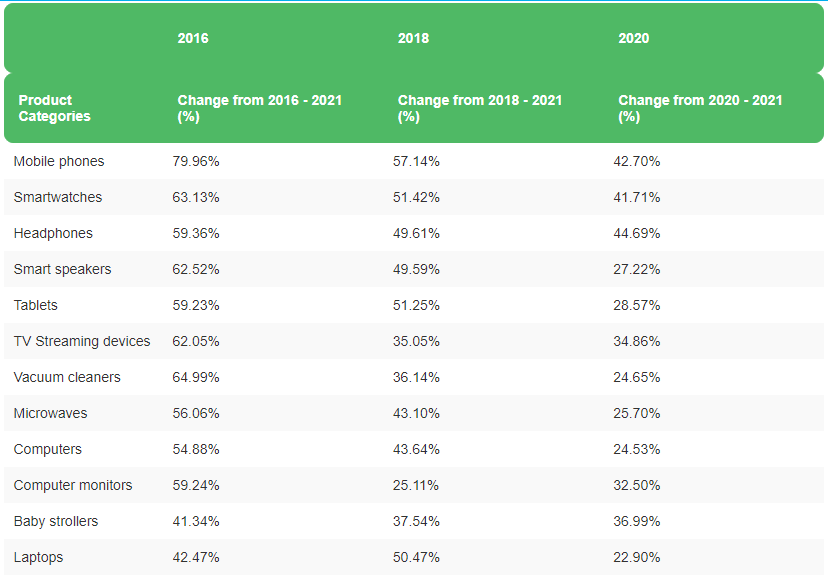 A big reason that these electronics depreciate so fast is that, for one, new products are coming out all the time, making the older ones obsolete only a few months after their initial release. Take the iPhone, for example.

And lots of consumer electronics companies do this so that they can make more sales, but the other effect is that resale values go to nothing overnight.

The other reason these electronics depreciate so quickly is that many of them are made cheaply. In order to compete with other companies, a lot of electronics companies will make the cheapest product they can to give you the best price, but they’ll sacrifice quality along the way. The result is a product that doesn’t have any resale value and breaks in a year or two.

I bet you didn’t expect to see something as random as toys on this list. But, while you might think toys are all fun and games, they actually depreciate faster than most other consumer products.

Yes, there are some super rare collectible toys that have actually appreciated in value, but these are usually highly collectible or plated in some rare metal.

But, for every one toy that’s appreciated in value, there are hundreds or even thousands that have faded into obscurity and have become completely worthless today.

So, you’ve probably received an offer to buy into a timeshare in the mail at some point or another. And you probably (hopefully) know that they’re almost always a scam or, at the very least, a bad way to invest your money.

Why? When you’re buying a timeshare, you’re essentially buying a week out of the year that you can spend at that condo, which makes sense if you’re going to thoroughly use that timeshare and enjoy it to the fullest for a week. It saves you the hassle of having to plan vacations and pay the fee to stay at a hotel.

However, “investing” in a timeshare is about the worst investment you can make. That’s because they tend to depreciate as much as 70% when you try to resell your week on the secondary market.

According to Investopedia, the average price of a timeshare is $23,000 on the primary market. But, when you go to resell your week on a secondary market, you’re probably not going to get much more than $7,000 (if you’re lucky).

On top of that, if you don’t sell your timeshare off to someone else, a lot of the time, you have to pay the developer to simply terminate your contract with them. All of this makes timeshares a very bad deal.

For most people who get into timeshares, it’s not much more than a very expensive vacation rental. And that’s got everything to do with depreciation. Moral of the story: don’t buy a timeshare.

This one makes sense if you think about it. Picture this: you find the one you love, you’re ready to tie the knot, and, when you put that ring on their finger, they see some scuff marks on it and notice that you bought it secondhand. That’s not a good look.

The same goes for wedding dresses. How many people out there would really buy a used wedding dress? Not a whole lot.

The depreciation on a wedding dress is a lot like that on a new car. As soon as you put it on your body, it can lose as much as 50% of its value. And that value keeps on dropping the longer you let it sit in your closet after you get married.

The same principle applies to a wedding ring. As soon as you take one home and put it on your finger, its value is going to drop significantly.

People also have very particular tastes when it comes to wedding rings. So, if you go and try to sell yours back to a jeweler, they’re probably going to have to take it apart and use the materials to make a new ring.

That means that they’re only going to offer you “scrap value” for it. In other words, they’ll offer you the price of the metal and the diamond. And, considering that jewelers typically sell wedding rings for around 4 times what the diamond and metal are worth alone (or a 300% profit margin), you’re looking at a huge loss on that resale.

Now, I know people don’t go into purchasing a wedding ring or a wedding dress looking at it as an investment. But, if it does come to the point where you’re looking to resell one of those products, don’t expect to get a whole lot of money for them.

Wouldn’t it be nice if you could buy a brand-new Porsche, drive it around for a few years, and then resell it for almost the same price that you bought it for years down the line? Well, unfortunately, that is very far from reality.

You’ve probably heard this somewhere already, but a new car’s value typically depreciates between 9% and 11% the very minute that you drive it off the lot. And, by the end of the first year, your new car will have probably depreciated by over 20%, and then will continue depreciating around 10% for every year after that.

Now, car depreciation will vary heavily between different car makes and models. European luxury cars will typically depreciate much quicker than bulletproof daily drivers like Hondas and Toyotas. And the depreciation on those Euro luxury cars can be pretty astounding.

For instance, the 2022 Maserati Quattroporte is expected to lose nearly 66% of its value in just 3 years! And, this year’s king of depreciation, the 2022 Audi A8, is expected to depreciate about 67% over three years.

So, yeah, as pretty much anyone will tell you, cars depreciate more than most other products out there. 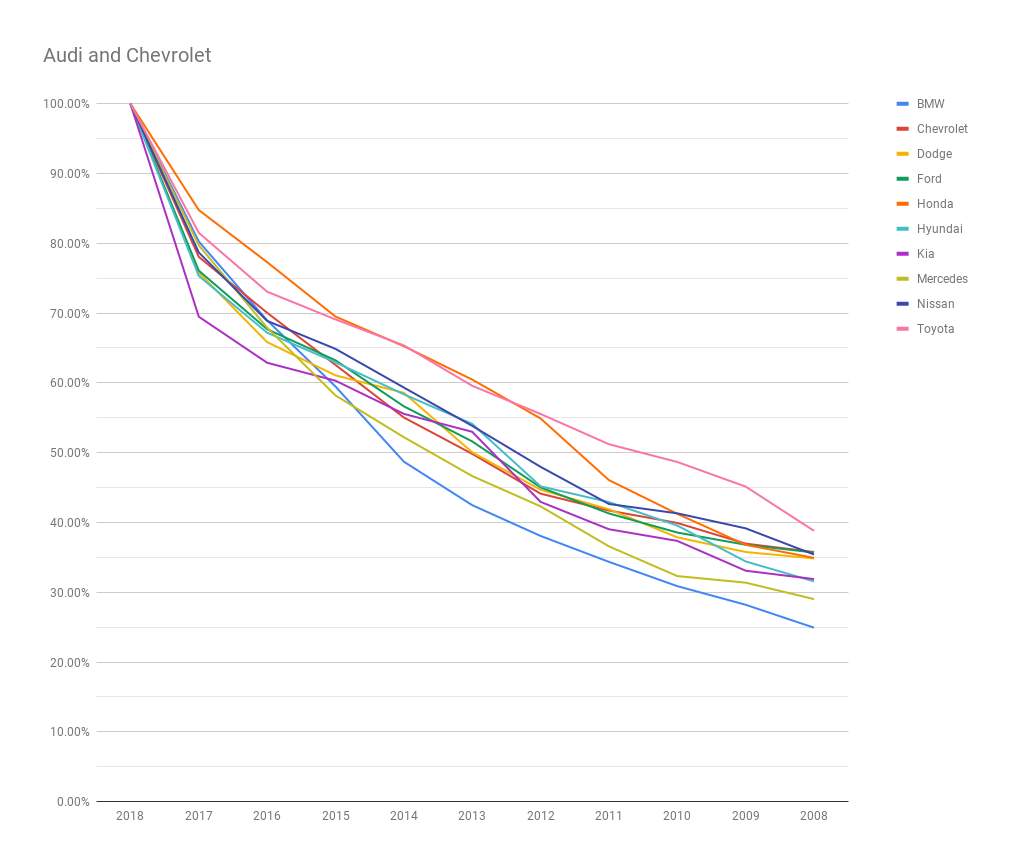 But it’s not all bad. The fact that cars depreciate so much means that you could potentially buy a super fun car for a tiny bit of money. And now’s the part where I plug one of our Ideal channels: Ideal Cars.

We have a ton of videos that are geared toward teaching you how to buy a car the right way: buying an awesome car at the bottom of its depreciation curve, enjoying the hell out of it for a couple of years, and then reselling it for minimal losses.

And, believe it or not, in some cases, your car might even appreciate in value. Unfortunately, though, the majority of cars do depreciate, and depreciate hard.

8 Used Items You Can Flip Online For Profit 2022

The 5 Questions You Should Ask Yourself to Save Money